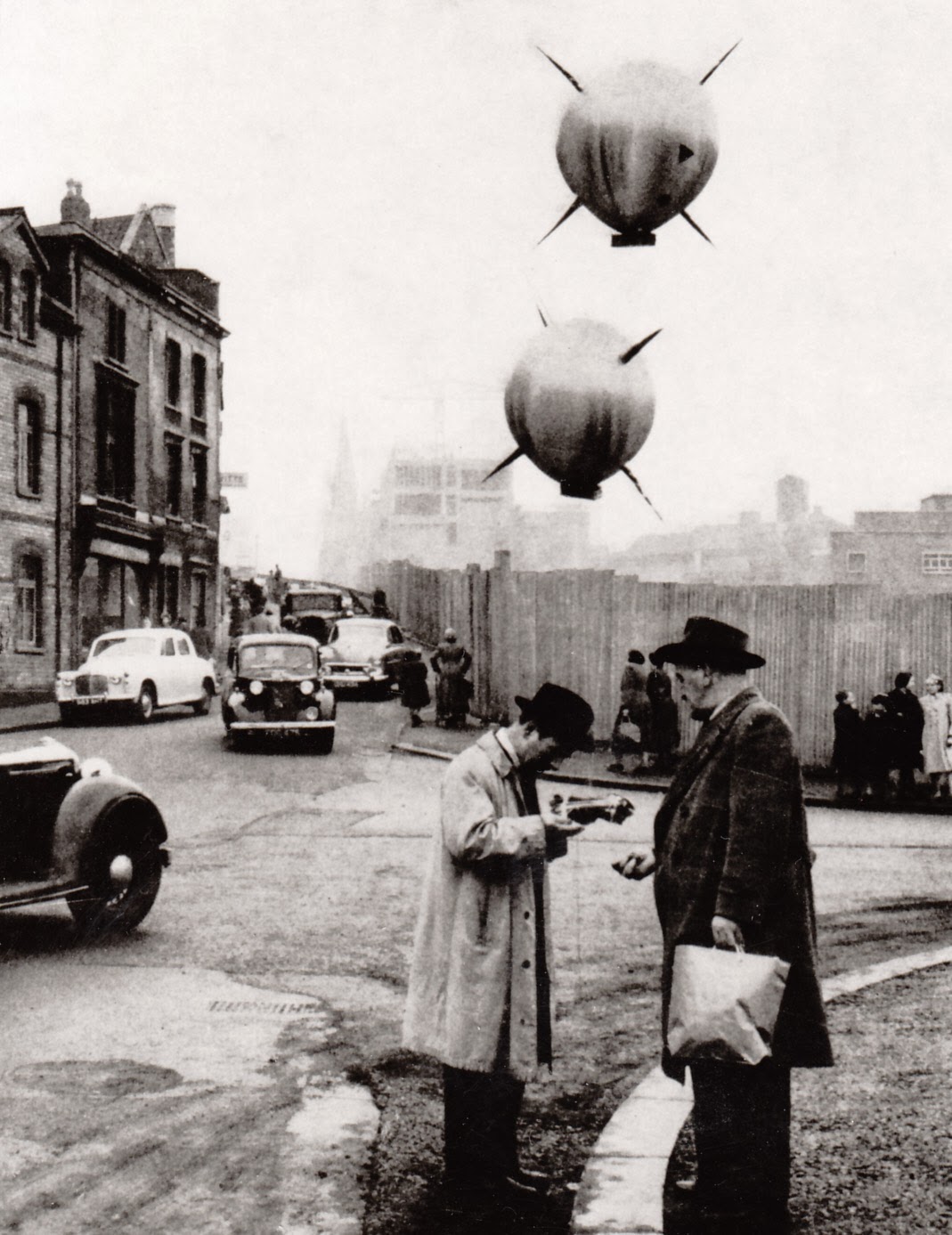 This photograph was taken on 21 December 1957. When the photograph was taken it had been 12 years since the end of the Second World War. It is an odd photograph, and without some accompanying information you could be forgiven for thinking it was a collage of sorts with some improbably spiky shapes added to a fairly ordinary photograph of people milling around a street corner. But there is no artifice to the photograph (though plenty, perhaps, in the photograph). The man with the light coat in the foreground is selling a balloon to the man with the darker coat who is also holding a bag. The balloons must be filled with helium and the spikes that stick out of them are meant to represent the Sputnik satellite, denoting radio aerials that were used to send signals back from the real Sputnik satellite to Mother Russia in its Soviet garb.
We are at the junction of three streets: Broad Weir, Merchant Street and Castle Mill Street. What we can see is an older Bristol that is about to be transformed: the buildings we can see on the left of the picture will be pulled down to make way for new shops and shopping precincts, and eventually for shopping malls. On the right we can see the massive corrugated iron fences that were used to fence-off bombsites. The bombing of Bristol effectively changed the shape of the city, making new spaces for development while leaving previously thriving streets to fall into decline. My great-grandfather had a haberdashery shop in Old Market Street; it now sells second hand electric guitars and amplifiers and science-fiction paraphernalia. It is rare to see a customer in there.
What, I wonder, was going through the mind of the purchaser of a Sputnik balloon in Bristol on this day in December in 1957? Had the Cold War infected this man who was clearly old enough to have played some part in the war? Or did he still feel a huge sense of comradely spirit for our Soviet Allies who lost so many lives during the war, fighting for our freedom as much as theirs? And what about the satellite, pointing towards the stars: was he filled with optimism for what some would learn to call the ‘white heat of technology’ leading us all into a starry future? And what did he feel about the fences pointing towards a slow rebuilding of Bristol and elsewhere? Was this heading towards the stars or to something more pedestrian in the shape of Woolworths, Marks and Spencer, and W. H. Smiths?