From about the age of seven through to when I was ten or eleven my dad used to take me to London, to visit a museum and to take-in a film. I used to think of it as an annual, summertime event, even though it only happened three or four times (and might well have happened during the Easter break). The film was always the latest James Bond saga, or else something equally spectacular, like one of the Alistair MacLean adaptations (Where Eagles Dare, Ice Station Zebra, When Eight Bells Toll). But before we saw the chosen film, with its excess of death, testosterone, and weaponry, with its unproblematic distribution of good and bad (with Nazis or Nazis-equivalents), we did our educational duty and spent time wandering around the Natural History Museum, or the Science Museum, or the Victoria and Albert Museum (or was it just the Science Museum each time?). I only have a dim memory of those days and how they felt. I was young enough to hold my dad’s hand, I think, and I loved the sense of ritual of those days but I probably felt slightly awkward too – I was not used to spending a whole day with him. But they were precious times. (There was always the worry that he would quiz me about school. Later, when these ‘father and son’ trips stopped, there was always the worry that being alone with him would be an occasion for him to talk to me about ‘the facts of life’. Awkward.)
The museum visit was a bit of an ordeal – but it was a penance for the main events, food, fizzy drinks, and an action film. There is something about museums – especially those museums in Kensington – that weighs on young visitors, however enthused they are about seeing displays about evolution, combustion engines, and such like. I think it must be something to do with the quality of the air: it induces a sort of sluggish languor. Perhaps the cost of an environment fit for preserving museum specimens, old books, art objects and so on, is an atmosphere that drains the liveliness from the living. Even now, as an adult overly enraptured by the past, someone who has managed to visit five museums in one day in Ghent, I still feel that sense of grinding ennui when visiting museums, galleries and libraries. The only solution I can think of is to rush round them as if the place is about to close.
Of course I could imagine museums closing for the night, but I couldn’t imagine a museum closing down, forever. How would that work: the institutions dedicated to preservation would of course be preserved otherwise there would be little point in their endeavour. The museums in Kensington have for the most part been preserved, but as I grew older and trips with my dad became relegated to the past I learnt that museums could have a precarious life. The Museum of Mankind, for instance, only existed for 27 years, from 1970-1997. But even more fleeting was the life of the British Empire and Commonwealth Museum in Bristol, which only lasted from 2002 to 2008. More comforting are museums like the Whitby Museum that has been going since 1823, though not in the same building. It is wonderful mainly because it has refused to pander to changing museum fashions. It is, in many respects, a museum exhibit within the vast imaginary museum of museums. Such a vast imaginary institution has clearly lost some exhibits along the way, all the more reason to cherish Whitby’s tenacious displays, with their hand-written cards and casings that allow you to weigh a Narwhal wales’ tusk in your hands. 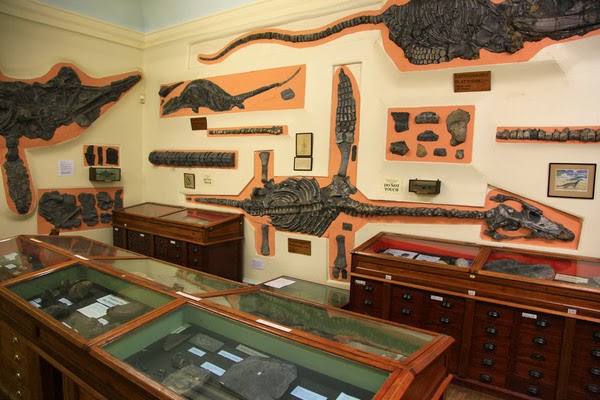