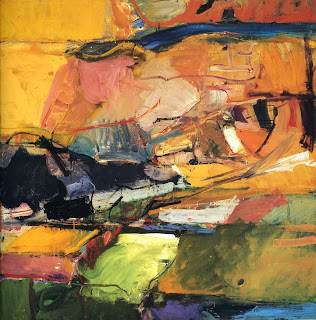 In some distant time, when the treasured items of industrial modernity will have been disinterred from the ruins of the Anthropocene, there will be some questions about what to make of those rectangles of paint on canvas to be found in museums across the world. What could be said, for instance, about those rectangles where the paint is arranged in patterns of line and areas of colour that don’t seem to refer to anything out there in the world (or out there in a world that once existed)? How would an archaeologist specialising in earth-history square the idea that these highly worked surfaces were produced at the same time as the world was producing global communication systems, pursuing space investigation, and developing human organ transplants? Would they be seen as cultic residues from a previous age – some weird, untimely practice with mystical associations? And how would this fit with the incredible monetary value that had been attached to some of these rectangles, or the critical evaluations that had declared these works as ‘cutting edge’, ‘progressive’, and so on?
Perhaps the producers of these paintings will be seen as mystics, shamans, weavers of magic spells? Or, more reasonably, as people who spent their lives experimenting with colours, space, tone, light and line, as a way of investigating nature, of cultivating an attention towards the perceptual world. From the other side of the Anthropocene such practices will be greeted with some sympathy if they can be understood as attempts to investigate nature but without the added ambition of then being able to exploit it for financial gain. The impetus to investigate colour, for instance, might well be seen as close to the metallurgists working to produce new alloys, but without the same potential impact on the earth. These coloured rectangles would perhaps be seen as non-instrumental experiments that refuse the ambition of wanting to master nature.
Yet the world of instrumental reason is vindictive. As a planetary force it is spiteful. Here it casts a veil of ludicrous inflated financial worth over these sensorial experiments. To stop us seeing them, it renders them opaque by equating them with the bombastic lustre of the commodity form. It is hard to see a painting of squiggles and blotches when it comes with a price tag in the tens of millions of dollars; it is hard to see it as a project to engage with when it is locked up in the massive jewellery stores that go by the name of National Galleries. An alternative reality would have liberated them, sent them out to grace the walls of primary schools, hospitals, and community centres. In this reality painting abstract paintings would have been seen as a noble pursuit: like keeping an allotment or learning the ukulele or designing a school.
Posted by Unknown at 07:55