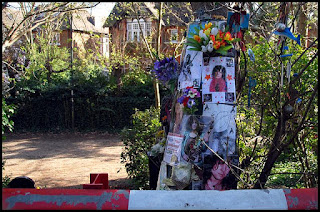 For a while I lived in the London ‘village’ of Barnes. It’s just over the river from Hammersmith and is favoured by media types and artists of a certain age (it has become far too expensive for the younger brand of bohemians). I had a very cheap room there as my friend ran the fish shop in the High Street. Sometimes in the morning I would find purple and blue lobsters lumbering around with thick elastic bands around their pincers. (I would see them again later, inert, and a livid orangey-pink.) In one of the residential streets I noticed a blue plaque telling me that Kurt Schwitters had once lived in the area.
It was in Barnes that the pop star Marc Bolan had died. His Mini had crashed into a tree on the bend of a road. I can remember when he died. Or at least I think I did until I looked it up on the internet and found that he died in 1977, when I was 16. In my memory I was about ten or eleven and one of the teachers at school told us. I remember how he rushed into the classroom visibly upset and told us that Bolan was in hospital and it looked like he was going to die. This can’t have happened as I was at a different school in 1977.
Bolan was for me the iconic pop star of the 1970s. With satin trousers and tousled hair Bolan was the one and only electric warrior. Well perhaps not the only electric warrior: there was always Micky Finn to contend with – the mysterious bongo player who cast an eerie shadow over T-Rex. What was he doing? Who needed a bongo player when you had a drummer? Perhaps he was there for the parties, the glamour; perhaps he was Bolan’s minder or his dealer?
When I was in Barnes I visited the site of Bolan’s crash. I knew it was a site of pilgrimage for his fans and that a shrine had built up over the years, with keepsakes, letters and ribbons festooning the very tree that had killed him. Like lots of things in life it was a good deal grubbier than I had imagined it. The purple ribbons had frayed and turned the colour of wet concrete. The letters had become unreadable after the predictably unpredictable English weather had had its way with them. I wasn’t sure what looked worse: the thoroughly dead flowers or the plastic ones whose unnaturally bright colour was fading as it absorbed the colour of exhaust fumes.
Where I live now I always pass a roadside memorial on my way to the train station. It must have been there for about ten years. The flowers and cards are replenished once or perhaps twice a year (on the anniversary of the crash, and perhaps the birthday of the deceased, would be my guess). It is formed around the metal post of a road sign. There is little that is more dispiriting that the sight of dead flowers stained with car fumes. The flowers and cards are taped to the post with parcel tape. This year there is a new addition. At the bottom someone had taped (using the same tape) an open can of cider. Perhaps it was the favourite tipple of the person being memorialised. Perhaps a drunk driver had caused the crash and this was a way of marking that fact clear. It reminded me of a wreath that had been fashioned to look like a giant cigarette (it is included in Jeremy Deller’s Folk Archive). The wreath memorialised the deceased’s deep love of cigarettes, a love that for some is also a death sentence. 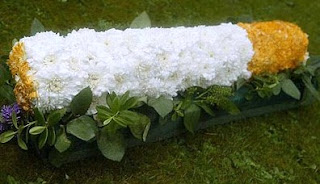