A Jam Jar of Gin

Yesterday, like a booze-fiend playing Russian Roulette with a pledge never to drink again, I opened a bottle of gin had a good sniff and then closed it. For me no drink is quite as evocative as gin – and there is no other drink I would prefer to dab behind my ears or smear on my wrists. The evocation is probably there in the smell slightly more than in the taste. Occasionally I like to take a hefty whiff of gin as a little mnemonic kick. It is one of my more reliable memory transporters: sniffing the distinctive juniper infused alcohol normally brings back memories of being fifteen and swigging neat gin in the lanes behind the school I went to. Sniffing the gin would sensually transport me to the cold nights where my little gang of refuseniks would pass round the jam jars of pilfered booze that we would have purloined from parental drinks cabinets. Sometimes it would be sherry, sometimes brandy, but most often gin. Yesterday however my little mnemonic spark wasn’t forthcoming. I think I must have worn out that particular memory trick.

Marcel Proust, of course, is the go-to guy for such things. It was his dunking and munching of Madeline cakes that named the experience of involuntary reminiscences as Proustian. Of course using cakes and gin fumes on a somewhat regular basis is not what involuntary memory is all about. Involuntary memory is meant to descend on you when you are least expecting it, corner you and mug you when your mnemonic defences are down, so to say. The regular subterfuge of forcing such memory-mugging isn’t in the contract – no wonder that repetition could destroy the mnemonic qualities of the material being used.

Sometimes memory vehicles wear out for other reasons than flagrant memory abuse. Smokers, after years of puffing, find that the occasional cigarette sometimes transports them back to those rushed Players Number 6s or Rothmans that were gasped on shivery afternoons in recreation grounds. But perhaps what happens after a while is there is a shift in remembering, and a second-order memory takes the place of this memory: the rush of memory energy does not reunite us with an event of giddy juvenile smoking but with the memory of the initial involuntary reminiscence seizing us. And then perhaps after more time has elapsed this become a memory of a memory of such seizing, till after a while all that is left is barely a memory at all, just a bare echo, or more like some nagging feeling that you’ve forgotten something and no concentration or effort will bring it back.

Before it dissipates, involuntary memory requires a force of energy to do its work. No wonder then that my examples all involve some slightly dodgy activity – underage smoking and drinking. They still, after all this time, carry with them a little charge that is probably related to the excited tension of transgressing and the possibility of getting caught. No wonder too that such involuntary memory is accessed via the sense forms that seem to, most reliably, escape rational processing: smell, touch and taste, in these cases trump sight and sound for mnemonic spills and thrills. The mnemonic forms that are going to last are also going to be those that are hardest to repeat: a particular smell of industrial cleaning products; the flavours of food that you’re not sure you would want to replicate; the occasional whiff of someone’s body odour.

I could imagine a memory club where addled Proustian types who had worn out their easily accessed mnemonic prompts, could go for help in tracking down these hard to find sensual memory stimuli. There would be rows and rows of jars replicating the smells of particular perspirations. A rack of scratch and sniff memory cards sorted year-by-year, place-by-place: “1963, seaweed in Clacton”, for instance. The smell of smoke-filled, beery pubs might become a bit of a favourite, but might also wear thin too quickly. Sweets might do it; especially those that sat on the edge of revulsion, like the twirls of cough candy. Giant rice puddings with slightly burnt tops might work for some, while for others it will be fiddling with out-of-date bicycle repair kits. There will be something there for everyone. It would look like a nineteenth century gin palace with hard-core reminiscence addicts staggering around befuddled from over-dosing on pear drops. 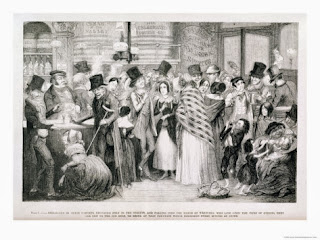