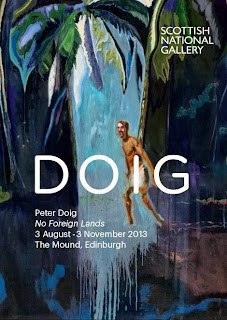 Alongside the ravine that lies below Castle Rock, in amongst the crag and tail of Edinburgh’s distinctive geography, sits, on an artificial hill, part of the extensive Scottish National Gallery. From August through to early November 2013 the gallery has been playing host to a large exhibition of Peter Doig’s paintings. You couldn't find a more vivid contrast: Edinburgh, often cold and wet, made of stone and shops, with elaborate buildings that declaim their ambition and intent; and then Doig’s paintings depicting the tropical vegetation of Trinidad in a painterly language that is jewelled, mythic, and, considering the size of the canvases, often airily light. There is little in Edinburgh that you would want to describe as ‘light’.
Peter Doig was born in Edinburgh in 1959, spent his youth in Trinidad and Canada, studied at various art schools in London, and found success in the early 1990s when the boosterism around British art was at its height. Doig now lives in Port of Spain, Trinidad’s capital, and paints in an old rum distillery which also serves as an improvised arts centre. The paintings collected together in Edinburgh under the title No Foreign Lands are nearly all set in the landscape of Trinidad and are peopled by figures that might have slipped loose from an opium dream – a man dragging a murdered pelican, a drunken and beatified Parisian holding onto a tree in a tropical forest, a man carrying a pink umbrella, a girl in white perched precariously in a tree, and endless figures – male and female – drifting by in canoes.
The canvases demonstrate the sort of post-perspectival concerns that alert you to the fact that you are at an exhibition of ‘serious’ painting and not a Jack Vettriano show: walls, windows, picture frames are all used in the pictures to productively worry about the planarity and frontality of painting; swathes of coloured paint, in various transparencies, often flecked with painterly incidents, depicting sky, water, sand, and snow are deployed to puzzle over the pull and obduracy of the painted surface. Doig has learnt his art in close proximity to the palette choices of Gauguin and the Fauves, his painterly graphics are indebted to Edvard Munch, and the crust and feel of his mark-making remind you of the landscapes of Gustav Klimt and Egon Scheile. But such borrowings are not mobilised for ironic commentary, rather they are requisitioned to produce the stage effects of the paintings, to make and enliven an intricate world of visual, painterly dramas.
Of course these paintings, with their monumental scale and their breezy figuration, can sit a bit too easily in the Neo-Classical grandeur of the National Gallery. Their post-colonial allusions vacillate between a critical re-imagining of colonised landscapes and a revamped exoticism of the tropics seen by the well-heeled cosmopolitan traveller. Perhaps most of the paintings are caught in the grip of this vacillation, for example the massive speaker stacks of Trinidadian sound systems, depicted as Mayan-like monuments in Maracas (2002-8), or the cricket game on a Gaugin beach where the ball acts as visual puncture, as a white blob that interrupts the blue-licked orange sand in Cricket Painting (Paragrand) (2006-12) (below © Peter Doig). And perhaps there is in the worrying dilemma of those vacillations something that make the paintings more compelling, more intriguing. 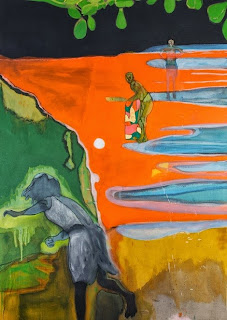 Doig’s paintings don’t answer the question: how do you make art after conceptual art, after the medium-specificity of modernism has been drained of meaning? Such questions, the paintings seem to suggest, are for those for whom time moves incessantly forward as one move trumps the next. It doesn't address the question of the institutional conditions of art, and doesn't seem interested in the curatorial buzz that you can still hear when words like ‘relational’, ‘situational’, ‘participatory’ are invoked. But perhaps they respond to other, more modest questions that are concerned with the state of painting as a global language where a history of expressive mark making can be turned towards the job of furnishing a body of work with an imaginative cosmology. It might sidestep the issue of critical art, but it does offer an imaginative landscape that, if you give yourself over to it, could colour your dreams.
Posted by Unknown at 05:39