For your listening pleasure… 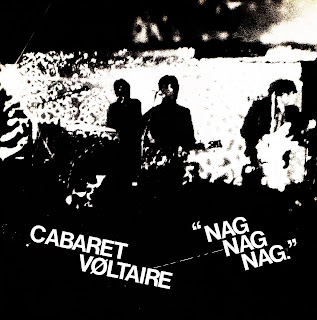 Yesterday, on the train to Brighton, I found myself sitting next to a business man. Everything about him screamed ‘Business’; from his pink striped shirt, to what was left of the grey hair on his balding head (he must have only been a few years older than me, but to my deluded eyes he was from another generation). Just in case it wasn’t quite clear how deeply connected he was to the world of high-finance, his IBM ‘think pad’ laptop was attached to an Ernst and Young lanyard. Ernst and Young are a huge global financial organization that undertake financial audits, tax services and all kinds of financial advising: I was clearly in the presence of a money drone. Because I’m nosey and can’t help myself from trying to read lines of text or titles of books, I had a sneaky peak at the flow charts on his lap top, but I couldn’t make head nor tail of them. But after about an hour I did notice what he was listening to on his mp3 player: Cabaret Voltaire’s Nag, Nag, Nag from the late 1970s. Cabaret Voltaire are, or at least were, purveyors of loud, throbbing industrial noise music, often accompanied by experimental films when they played live. They were the sort of pre-post-punk band that made nearly all-other punk bands and post-punk bands seem a bit on the cute side.
I had a vision. Perhaps all the CEOs of large companies, all the managers of Hedge Funds, all the directors of Merchant Banks were still deeply attached to the music of their late teens. I imagined mahogany panelled offices with extensive views of the Thames being inhabited by suited business men with headphones blasting out classic Fall anthems (‘the West German government sent over big yellow trains to the Teesside docks… the North Will Rise Again!’). Perhaps there were boardrooms stuffed with people undertaking acquisitions and mergers whose playlist were brimming with the caustic sentiments and sonic blasts of the Pop Group, Pere Ubu, the Au Pairs, and Blurt.
A little while later my fellow commuter changed his mp3 player to the proto-rap of Gil Scott Heron. The revolution will not be televised. Indeed.
Was this a contradiction? Were these the fifth columnists working in the market place? Were all these money drones really working to bring about the demise of capitalism (in which case they were doing a pretty impressive job)? Or was it something else; a form of mourning?
Some years ago they built a large supermarket in an area of my town that once had a large open market next to a dog track. At one point it was a thriving area. The supermarket and the other large box stores that accompanied it put paid to that. Inside the large supermarket were wall-size photo-murals depicting in sepia tones the bygone age of open-air markets. There is was no irony here, or contradiction. Just dislocation and discontinuity. This will kill that. This has killed that. Nag, Nag, Nag is the torturous cry of a de-industrialising age. It is ghost music.
Posted by Unknown at 04:54