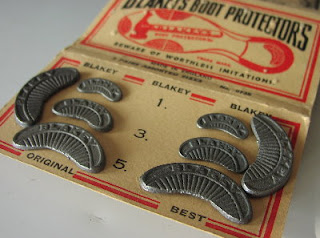 As a child of about eleven the little gang I hung out with must have felt that we didn't have enough presence in the world. It is all very well treading lightly on the earth but wafer-thin eleven year-olds need some material gravitas or they will float away. One of the many solutions we found to our lack of earthly presence was to intensify our sonic force – to make some noise. This was the early 1970s, a time when Noddy Holder and his Slade comrades were beseeching us to Cum on Feel the Noize (the spelling was designed to approximate the regional dialect of the Black Country area of the Midlands of England).
One way of making some Noize was to fix pieces of card to the front and back forks of our bikes so that they caught the wheel spokes, producing a clattering noise. This was meant to sound vaguely like a motorbike revving, or the clatter of a football rattle, but sounded exactly like pieces of card being constantly whacked by wire spokes. We were, I'm sure, taught this technique by older kids.
The early 1970s must have been a time when people were worried about gravity and the lack of it as the fashion in shoes resembled the sort of weighted-boot required by deep-sea divers, or the build-up disability shoe needed to counter a disparity in leg lengths. The stacked shoe, the must-have foot ware for any youngster or man or woman-about-town was a weighty thing. Glam-rockers like Slade favoured the excessive soled and heeled boot, which often looked like a bovver-boot with additional soles and heels attached that had then been spray painted silver. High-street fashion could be just as whacky and there was a period, I'm pretty certain, when you were limited to buying varieties of stacked shoe from a quarter-inch sole (favoured by Clarks) to two inches and beyond. It is no wonder that the audiences to the Top of the Pops shows from the early 70s seem to shuffle about – their shoes must have been weighing them down.
My mother would buy my shoes a size or two larger than actually fitted so that I could grow into them (though they usually wore out before this thrifty wisdom came into effect). I must have persuaded her not to get my shoes at Clarks at some point and to opt instead for a fairly decent stack with plastic uppers. They were pretty heavy. For my comrades and me, though, just having a weighty stacked shoe wasn’t going to be enough – we wanted additional sound. So we regularly studded the soles and heels of our shoes with Blakey’s segs: these were little moons of metal that you could stamp into the heels and toes so that you could make the sort of clatter that an inebriated and inexpert tap-dancer might make. They could also produce a stuttering shower of sparks when riding your bike and using your shoes as a break – this worked best on concrete. When you walked down the corridor in school you could sound like your sonic presence was really being noticed by the world. 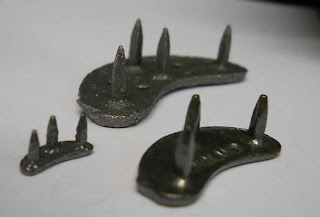 One balmy summer night a bunch of us wandered about the cul-de-sac where we lived. We purposefully scuffed our feet as we went, not really realising that the segs we had attached to our shoes were designed to protect them from the wear that scuffing could cause. For us they were an invitation to insistently scuff – a way of learning to become life-long scuffers. Somehow out of nowhere we started to chant, to shout, one word. The word was ‘BOLLOCKS’ and I don’t think any of us knew what it meant – I certainly didn’t. We didn’t shout it with any venom or even disdain. I think we chanted it in a celebratory incantation – in the way that other people might give praise – it was our momentary Hallelujah. Each time we shouted it we grew louder, till the word started ricocheting off the walls and rooftops of the houses. Doors started opening and soon a parent of one of us ran up to us and told us to shut up. That was the end of the night as we all went back to our own houses to receive our own lesson about swearing and to learn our fate.
Posted by Unknown at 09:25