Keep it under your hat 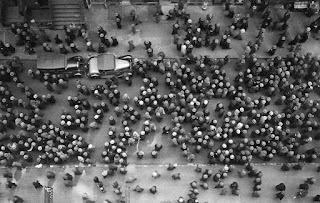 Once upon a time many national cultures were hat-wearing cultures. Everyone, or nearly everyone, wore them, and they wore them every day, not just for funerals and weddings. Kids wore them to school, or when out delivering newspapers; grownups wore them to work and to church, or just to go and fetch some groceries. For men and women a hat denoted a world of class, inflected by gender, ethnicity, age, region and eccentric preferences. Some jobs were signalled immediately by the choice of hat (butcher or bookie, for instance). But it was a dangerous thing simply to assume you knew where a person sat in the social hierarchy just because of the hat that they wore. And of course it wasn’t just the choice of hat that was important, it was also the way you wore it. When hat-wearing died out what was lost was a smorgasbord of micro-gestures: hat tilting, hat tipping, hat hanging, and a range of jaunty and not so jaunty angles. It is hard to imagine the Hollywood worlds of Film Noir without hats, or comedies like His Girl Friday as a hatless movie. Song and dance numbers needed hats the way that tap-dancing required special shoes.
How did hat wearing die out? When did hat wearing begin to mark you out as an eccentric or as old-fashioned or as an extravert? Presumably it was gradual, the cultural work of a generation. Presumably a young generation of adult males (or mainly males) entering the workplace started to stop wearing hats as they sought to differentiate themselves from an older generation of hat wearers. Or perhaps casualization meant that it just began to become noticeable when young people were wearing hats as if they were trying to be old before their time. School teachers at more progressive schools probably started to jettison the school cap or hat as an affectation of more disciplinarian schools. Gradually hat wearing would seem old-fashioned. But as hat wearing stopped being a ubiquitous part of everyday life hat-based sayings simply carried on unperturbed. People still keep things under their hat even if they have no hat to keep things under; urban nomads might continue to say ‘wherever I lay my hat that’s my home’ even if they are dogmatically hatless.
Many hats had a practical purpose of protecting the head from the cold and the wind, from rain and snow, or shadowing the eyes from strong sunlight. But there was also something of a lived metaphorics about hat wearing. To put a hat on your head when leaving home in the morning was like putting a roof on your head: it suggested the continuation of a domestic, private space that could continue within the public realm. Peaks and brims worked like awnings and vestibules to suggest a semi-private space. Today we negotiate the private dimensions of public space with earphones and smartphones. But hat culture was always much more permeable and nuanced. Sure you could pull your hat down as a ‘do not disturb sign’, but you could also tip it up a notch to suggest a friendly openness to communication.


Is there anything more intimate than the idea of two be-hatted people kissing?
Posted by Unknown at 03:04